Have you ever watched a movie on Netflix or played a game on Xbox Live? If you have, you are engaging in the new media revolution. You may notice that the content you access on services like Netflix and Xbox Live can be streamed quickly to any device reliably, no matter where you are. As of June 30, 2013, Netflix reported having 37.6 million customers in the U.S. alone who stream volumes of content on a daily basis. So how do companies like Netflix handle so many simultaneous requests for high-definition video and other content? New developments in cloud-based computing and content delivery networks (CDNs) power the ability to serve content on-demand. 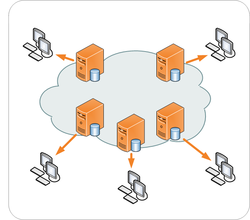 Streaming content: A quick sketch
To illustrate this process, we will stick with Netflix as an example. While you watch an episode of your favorite television series on its platform, Netflix is making a number of logical decisions behind the scenes in order to serve the requested multimedia quickly and reliably:

The technology: Caching
Large content distribution companies like Netflix need servers located around the world at intersections called global peering points. These peering points are the most efficient location on the Internet from which to serve content to a particular geographic area. Distributing new media globally requires a service that easily facilitates the storage and distribution of media-rich content from these points.
This service is called a content delivery network (CDN). A CDN can distribute content geographically and also keeps a cache of the most-accessed content. Using a CDN ensures that content will be seamlessly delivered to a user, without lag or interruption. A popular television show like Breaking Bad, for example, would be stored globally and seamlessly distributed though Netflix’s CDN to any requesting device, making sure consumers are satisfied with the service and come back for more episodes.
Photo credit: Wikimedia Commons