According to Ryan Hansen of TopTenReviews, “CacheFly’s simple pricing model, extensive selection of services and excellent performance puts it at the top of Content Delivery Networks for small businesses.”

The independent reviewer, found the following features from CacheFly’s setup and compatibility, security, and help and support offerings, most notable: 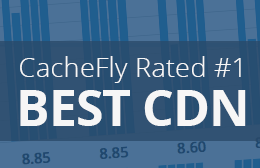 To accurately measure performance metrics with Cedexis, TopTenReviews was able to pull data from actual end users of CDN providers to gain insight into real-time performance metrics available to the public. In addition, the independent reviewer, obtained test accounts with each CDN provider for access to each control panel—to evaluate overall usability on features, such as reporting and analytics.

In 2010, Paessler, a leading worldwide network monitoring software provider, conducted a “Real World” Performance Comparison of Content Delivery Network (CDN) Providers, monitoring the performance of 24 CDN and cloud providers using their own Internet connection. The findings determined CacheFly to have performed the fastest in all four categories (1st and average request time, globally and USA).