Airlines are utilizing digital billboards as a new way to reach consumers during live-streamed, in-flight entertainment on their electronic devices. 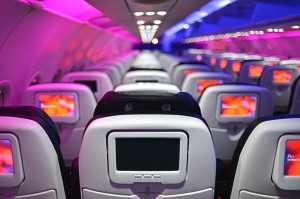 More advertisers are looking to creative digital signage as a way to access their customers and prospective customers in ways and places they never have before. Digital billboards have become a fantastic way to connect with consumers on the go, and they have recently reached new heights as airlines embrace a makeover for their seat-back trays.
According to tnooz, Clear Channel Airports has partnered with SmartTray International to create a new line of products that will replace the seat-back tray as we know it. Airlines will be able to easily switch out the old trays for the newer version, which has space for food and drinks as well as a place for passengers to prop up their tablets for easy, in-flight entertainment. Now that the U.S. Federal Aviation Administration has allowed the use of devices during flights, technologies like the SmartTray will become increasingly relevant in the digital advertising space.
Wi-Fi servers deliver in-flight content by streaming video to passengers. An enormous advertising opportunity emerges when passengers are encouraged to use their devices with the SmartTray, essentially turning their tablets into digital billboards. Airlines will have to decide which revenue stream will be most lucrative, selling downloadable in-flight entertainment or offering free on-demand television and movies with advertisements. There is no doubt that sending ads directly to an already captivated viewer is an exciting proposition for companies focusing on this demographic.
Whichever way airlines decide to generate revenue with these new, in-flight billboards, it is clear that there will be a growing demand for uninterrupted content delivery for their customers. They are hardly the only ones taking high bandwidth live-streaming to the next level. Wired reports that Spike Aerospace is building the first supersonic private jet, which will include digital display technology that live-streams images of the skyline outside, replacing the windows on the airplane.
High-performance content delivery networks will play an essential role in making all this live-streaming possible. The challenge for airlines moving into the digital space will be providing this rich media content to their passengers without running into lagging response times due to lack of infrastructure. Partnering with an industry-leading CDN provider that can deliver quality video and IPTV will ensure consumers get the entertainment they need, fast and consistently.
Photo credit: Flickr